CZ is set to release a special edition that commemorates the centenary of the Czech Republic’s highest state decoration and represents the world’s first blockchain-authenticated firearm.

The Order of the White Lion is the highest state honor for both Czech citizens and foreigners for outstanding services to the Czech Republic, eminent contributions to the defense and security of the state, and for enhancing the nation's international reputation. It is a continuation of a Czechoslovak order of the same name created in 1922.

To commemorate the centennial of the Order of the White Lion, the Office of the President of the Republic commissioned a hand-engraved, 100-piece edition of the legendary CZ 75 pistol from Ceska zbrojovka (“CZ”), the Czech Republic-based subsidiary of Colt CZ Group and a long-term partner of the Czech Armed Forces.

Colt CZ Group is proud to announce that it will be the world’s first small arms producer to authenticate firearms with blockchain technology. For this special CZ edition, each unique Order of the White Lion pistol will be blockchain-authenticated in cooperation with the BlockTrust company and its Web3-as-a-Service platform.

“We believe blockchain can bring outstanding innovation to the commercial firearms industry. It will allow us to introduce new standards of authenticity, safety, and trust never seen before. We are proud to be leading the way with this technology as one of the largest manufacturers of firearms in the world. The non-fungible tokens bring to our customers a digital proof of ownership and assurance of authenticity of these unique collectibles, thus increasing their value. We are also proud to associate our first blockchain-authenticated product with the highest Czech state decoration, the Order of the White Lion,” underlined Jan Drahota, CEO of Colt CZ Group.

Due to the high-demand for limited, hand-engraved special editions of pistols by CZ, Colt CZ Group has decided to give a fair chance to its customers worldwide to obtain the CZ 75 Order of the White Lion by making it available for purchase through an NFT (non-fungible token) auction process, for the first time in the history of the company. The physical firearms will be delivered to the holders of a winning digital auction certificate, as they are handcrafted over the coming year.

As the CZ 75 Order of the White Lion is a truly limited-edition firearm, Colt CZ Group has created a unique opportunity: Any purchaser can ensure they receive the next physical firearm created by topping up their bid to be first on the list for the serial number of their choice. Those interested to know more about the NFT auction, which will take place in the coming weeks, can register on this website: https://engravings.czub.cz/en/cz-75-white-lion/.

Colt CZ Group will donate part of the proceeds from the NTF auction and the bid top-ups to the collection account of the Embassy of Ukraine in the Czech Republic in support of the Ukrainian Army.

The very first CZ 75 from the 100-piece Order of the White Lion edition will be auctioned off in a special online event by the Artslimit auction portal of the Kodl Gallery, which successfully sold the CZ 75 Republika in 2019 in a charity auction. The online auction will be held over the course of two weeks, starting on Monday, December 5, and finishing two weeks later, on Sunday, December 18. The proceeds will be donated to the Endowment Fund of the President of the Czech Republic, Milos Zeman. This Fund supports the activities of non-state institutions providing temporary family care for children. President Milos Zeman will personally present the auctioned CZ 75 Order of the White Lion to its new owner in a special ceremony at the Prague Castle.

The CZ 75 Order of the White Lion edition is richly decorated with Czech national symbols, in the form of linden tree leaves and a double-tailed lion. The controls, extractor, grip screws, and magazine base plate are gold-plated. A shield with a crowned, two-tailed lion from the lesser coat of arms of the Czech Republic is from 14k gold and set into the right-hand side of the frame.

Each pistol in the CZ 75 Order of the White Lion edition is housed in a case made from three types of wood. Like the pistol grips, the case is made of maple and the sides are made of luxurious birch root. The lid is made of walnut. The interior of the case is lined with plush, red microfiber, which is close in color to the Order of the White Lion star. The lid, which is connected to the case by two tricolor ribbons, features an original certificate from the Office of the President of the Czech Republic, signed by President Milos Zeman and dated October 28, 2022. The outside of the lid is dominated by a relief that depicts the Order of the White Lion.

The badge itself, which is considered by many to be one of the most beautiful in the world, has the form of a five-sided, red enameled star, whose sides are joined together by linden tree leaves. The center of the star is decorated with the traditional emblem of the Czech lands – a silver two-tailed lion with a golden crown and golden armor. Among the recipients of the Order of the White Lion are truly the greats of our time, such as President Vaclav Havel, American diplomat of Czech descent Madeline Albright, industrialist Jan Antonin Bata, Sir Nicholas Winton, General John J. Pershing, Nikola Tesla, Dwight D. Eisenhower, Paul-Henri Spaak and many others.

Hand-engraved handguns by CZ and Colt are sought-after investment opportunities and an immensely interesting collector’s item. The 2019 auction of the limited edition CZ 75 Republika at Kodl Gallery raised CZK 650,000 for charity, while the purchase price of this pistol was CZK 200,000. The September 2022 auction of the same model in the Goltzova tvrz Gallery fetched CZK 980,000. In March, another of the limited editions – the CZ 75 Tobruk – raised CZK 5 million at a gala evening hosted by Forbes magazine and the Freedom for Ukraine initiative to help Ukraine.

Colt CZ Group (Colt CZ) is one of the leading producers of firearms for military and law enforcement, personal defense, hunting, sport shooting, and other commercial use. It markets and sells its products mainly under the Colt, CZ (Česká zbrojovka), Colt Canada, CZ-USA, Dan Wesson, Spuhr, and 4M Systems brands. 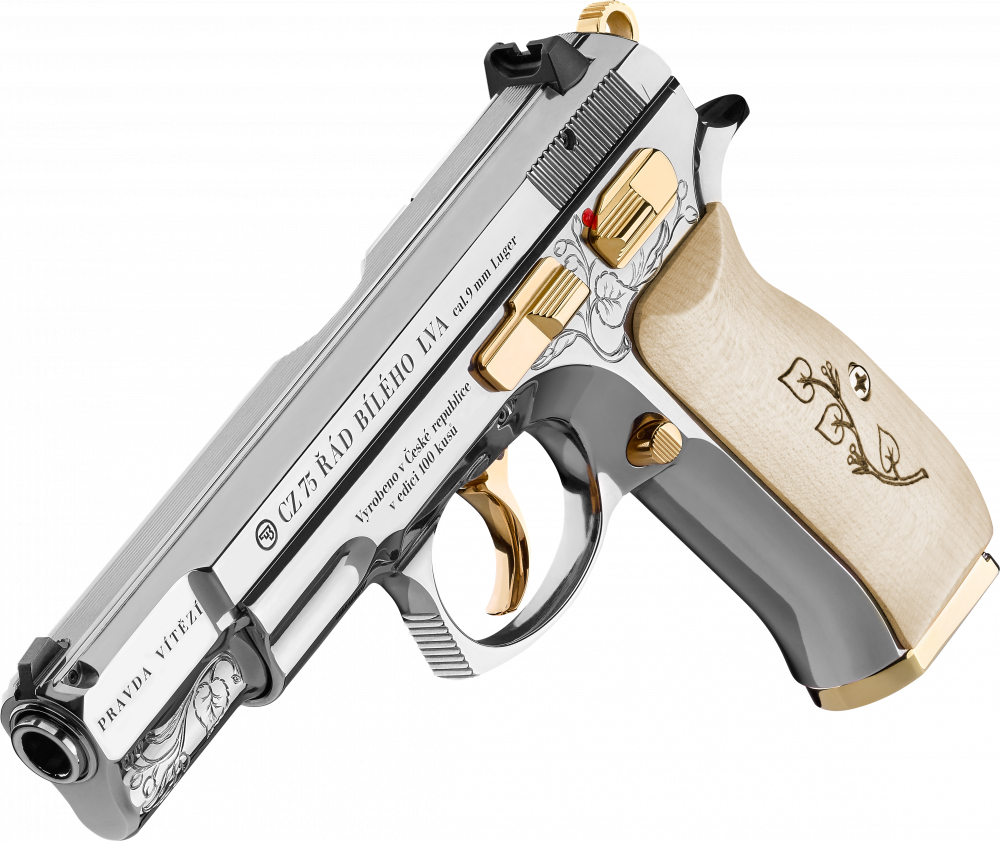 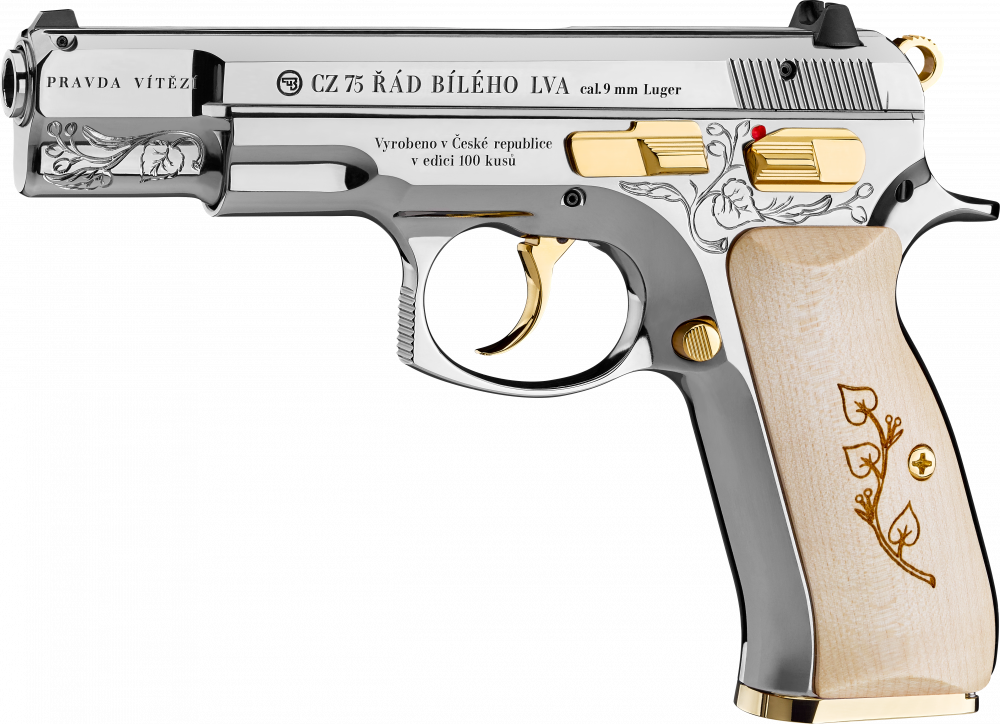 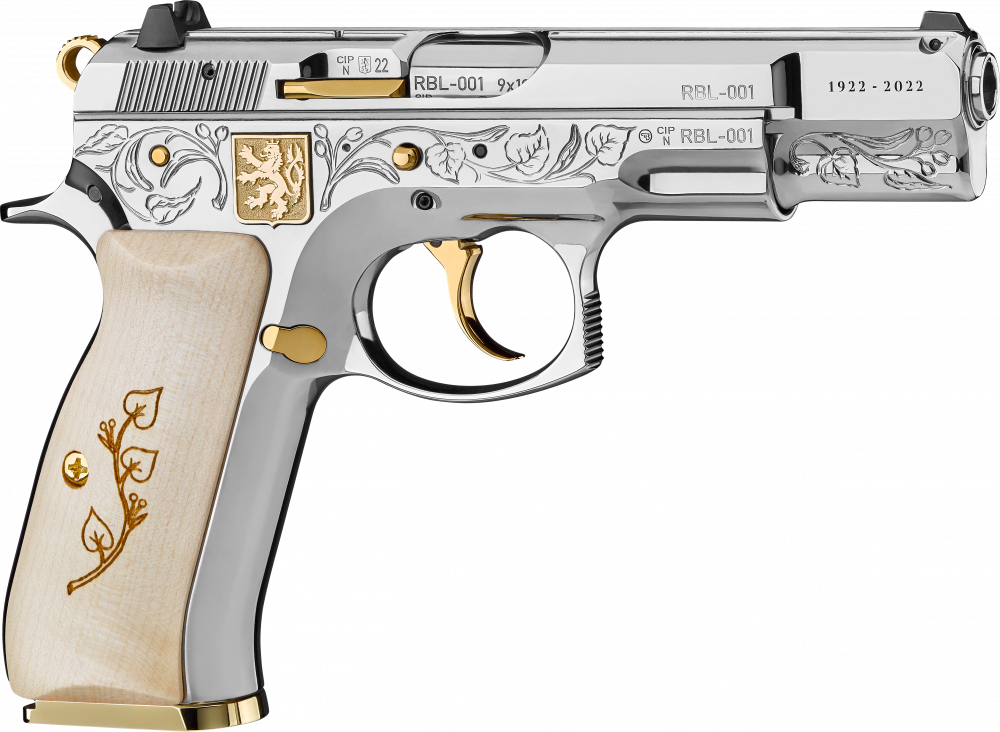 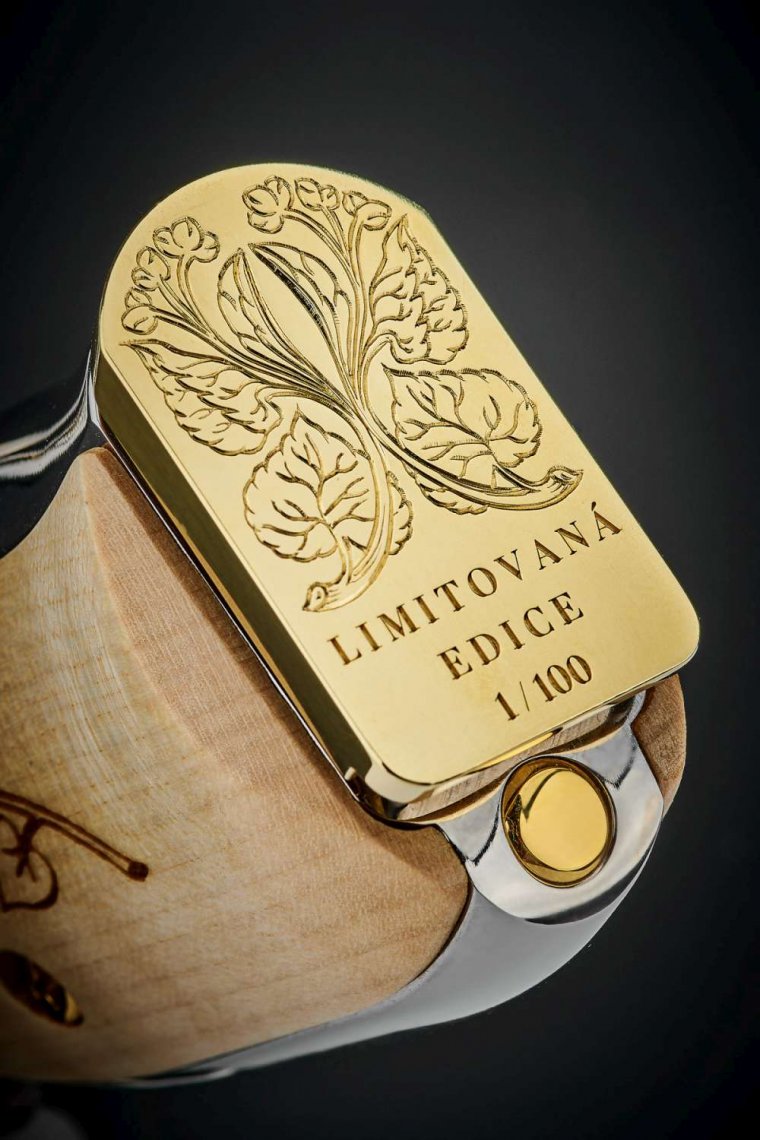 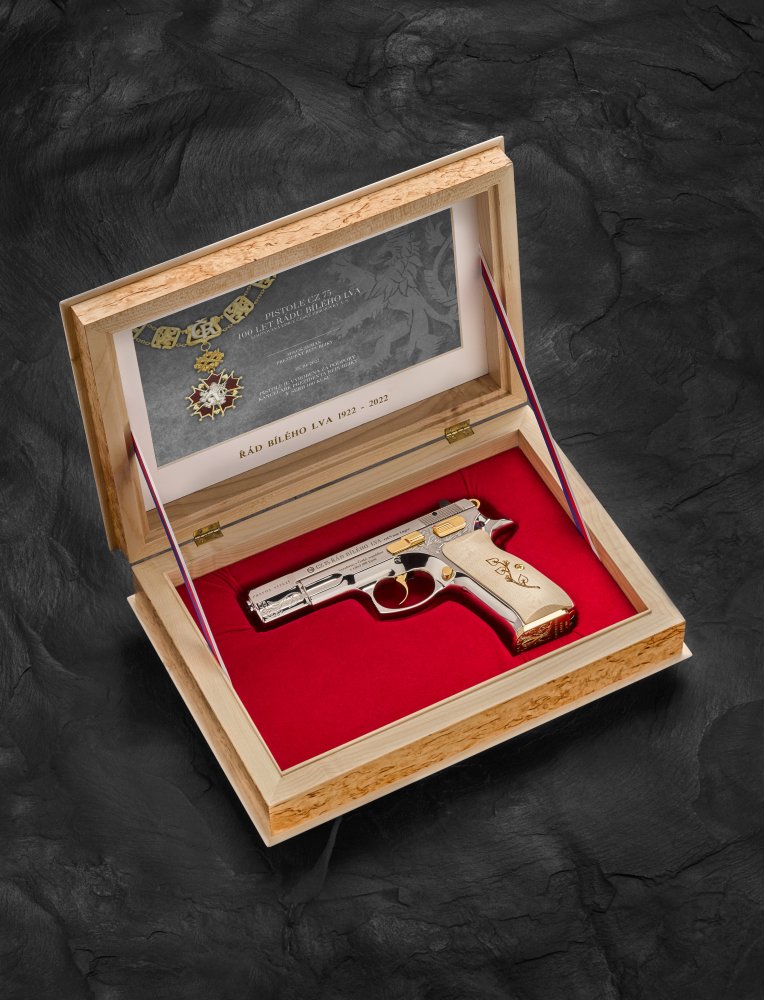 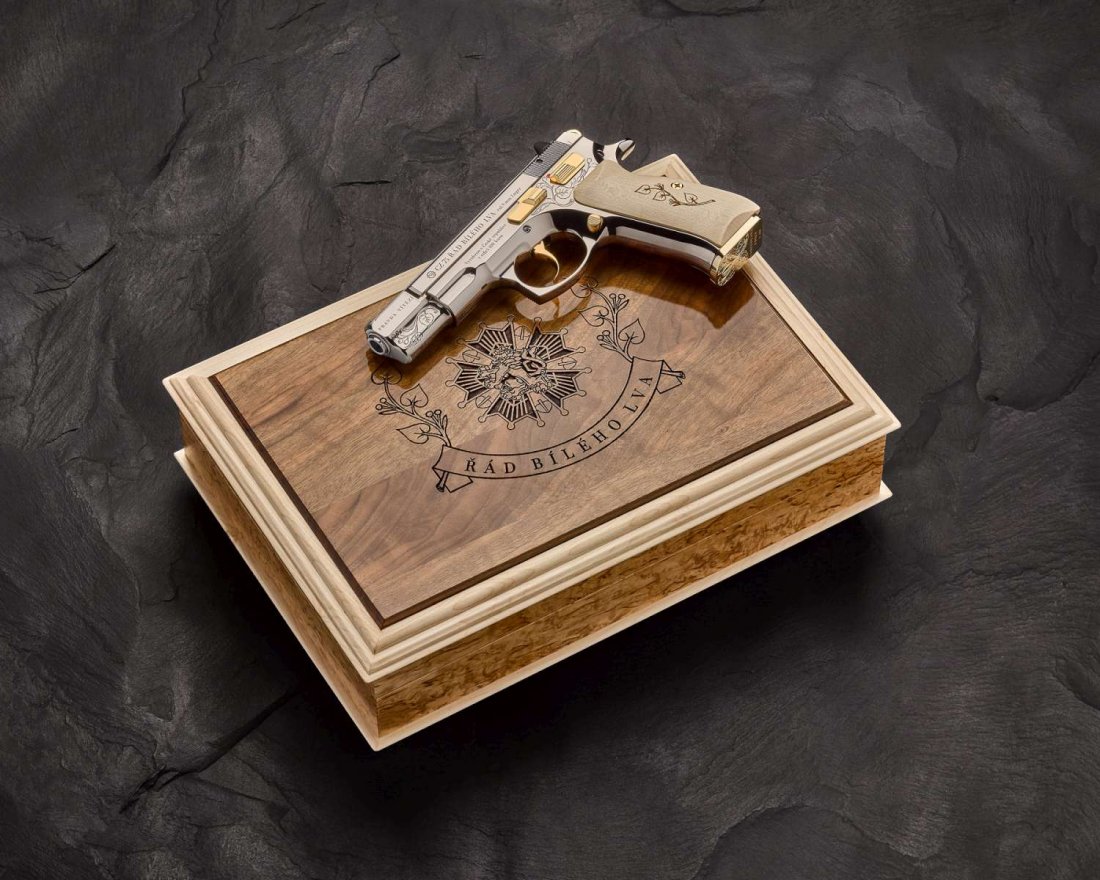