I still want to be the best in the world

The CZ Shooting Team is indeed an international squad which thanks to the superb properties of CZ guns attracts the best shooters from all over the world. The latest asset to join the team is Eric Grauffel, a living legend from France and many-time world champion who has demonstrated his great talent in three IPSC divisions. Anybody who wants to improve in practical shooting will certainly welcome the fact that Eric’s liaison with Česká zbrojovka a.s. is not limited to taking part in competitions.

How did you get into guns and sport shooting?

It was my dad who introduced me to them, when I was little. When he was in the army, he became a national champion and then with some of his friends he established a shooting club. I think it was in 1975 and he ended up presiding over it for about 10 years. When I was little, my parents both worked, I didn’t have any babysitters, I basically spent just about every weekend at the shooting range. I must have been about six, so I had access to guns and ammunition from an early age. I started shooting when I was about eight years old, so we can say that I’ve been around guns almost all my life.

When did you take up IPSC shooting?

Exclusively since I was about 15, so that is around 24 years now. Let’s say that in professional shooting, I am quite old. (laughing)

What do you consider to be your greatest success?

My best success? I would say that it’s got to be my champion titles won all over the world, some of which I have achieved several times over. I think it is something that nobody else has repeated yet and I think it will take a while before anyone does.

And what are your immediate goals in IPSC shooting?

Shooting, I expect. I need to keep shooting, I am a competitor so I need to shoot and compete. It’s like a drug for me, I just need to shoot. And regarding new goals – I don’t know yet, I have already achieved a lot. But the main goal for me is to keep taking part in main events and shoot to be the best in the world. I am still very competitive.

But we don’t know what division yet. I will try Production, Standard as well as Open, a last-minute call is also an option. We will see what is best. I like the idea of the last-minute decision, it kind of keeps things spicy.

How and when did you get into CZ guns?

Well, January 1st 2019 – I am just starting with them. We are going to work on a mutual project, we have in mind a kind of a shooting academy. Also, I will be involved in the development of a new gun for the Standard and Open divisions. Working with such a renowned company is a great challenge for me, as is becoming a part of such a great team and participating in several projects all at the same time. That is a pretty big task but at the same time very exciting.

So, you still don’t know which CZ model you will choose to shoot?

I would pick all of them, a different one for each division – I like this idea. (laughing) And I also like the idea of developing new guns. I have my own shop and my own team of people. We like to develop new models and I think we are very good at it. We like to test and actually modify whatever we can. So, we cut things down, do a bit of upgrading here and there or find other solutions. We improve equipment, materials and put the resulting model into production. For me it is important that other people can buy whatever I use. The models are not specific models made for specific shooters. They are customized but still accessible to everyone.

Do you already own a CZ gun or are you still waiting for your first one?

I am still waiting. We started sorting out the necessary permits and documentation only at the start of January 2019 so it will take a while.

What has led you to collaborate with CZ? Where did it all begin?

In a certain sense, it is only just starting now. I have always had a very good relationship with the shooters from the CZ Shooting Team, we are friends. We meet at competitions all the time, some of them I have known since they were little nippers. (laughing)

I have also got on very well with the with the Team’s boss, Jakub Sondel. He would always come up to me and say: “Hey, who knows… you never know… one day… we will see…”. And then I came up with the new project of building a shooting academy. Jakub heard about it and in the end, we thought that it would be a great opportunity to create something bigger than just a training centre.

What do you expect from this collaboration?

Naturally, I expect that we will all give our best to succeed. So, we all have to pull together. My job is to make sure we make good guns, to pick the right bits to modify so as to get the best result possible. And I guess Česká zbrojovka would like me to do a good job at competitions and carry on winning as well. But we must also work on the new academy which will be a great marketing tool. We will be able to make sport shooting accessible to the wider public and at the same time promote this brilliant sport. I hope we will be able to get best team of instructors in Europe as well. All that will help us promote the brand and the sport too. What I mean is that it is not just a business venture, it is much more than that.

In what aspect do you think CZ pistols are better than the competition?

They are all different. We cannot say that the gun I used today is better than another one. It is as if you compared Michael Schumacher who was with Mercedes and then he went over to Ferrari. Success is a combination of a driver and his equipment, which plays a big part too. When we are using CZ guns, we know we are at the top of the world. We are in the lead and losing is basically not an option. So, we have a great combination of the end shooter and the equipment he or she has available. This makes for a win-win situation. And when we have great guns and great shooters, we have to find out which gun is best for each shooter.

Personally, I prefer new models. For Production I will get the CZ SHADOW 2 ORANGE with the new barrel bushing which offers even better accuracy. As I have already mentioned – unfortunately, I am getting on a bit in this line of work, so I need a few tricks to stay sharp. (laughing) 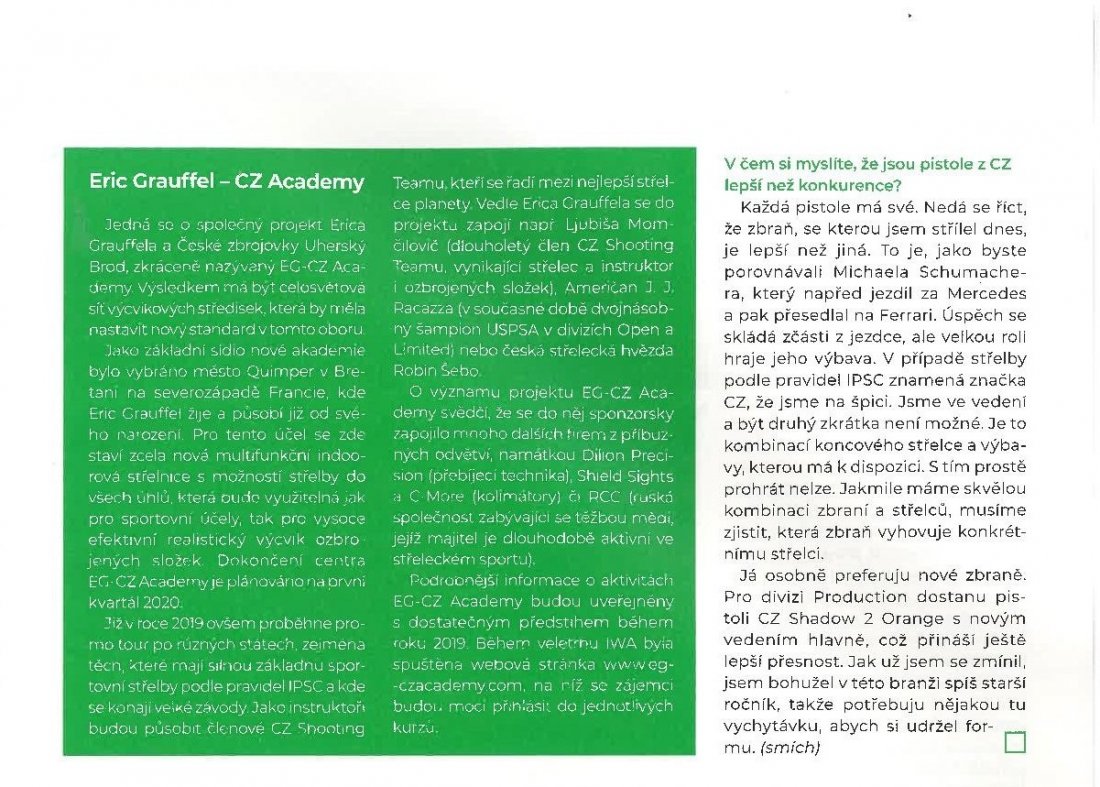